November 22, 2013, will be the 50th anniversary of the JFK assassination. Readers of this blog know I’ve compiled a list of every song I can find that references the JFK assassination and I’ve been going into some depth analyzing many of the songs on that list. Earlier this year I got the idea to ask bands to contribute garage, punk and psychedelic tracks for a new compilation of JFK songs. On November 1st, I published a collection of 26 tracks on Bandcamp called Conspiracy A-Go-Go.

The idea to originate a compilation of new JFK songs came during the summer when I contacted a three piece band from Detroit called JFn’K. According to Jeremy Otto, “The band came together many years ago kind of haphazardly. We came together to fill a void and play a few parties. We didn’t give much thought to a name and it happened because it worked with the initials of our first names, Jeremy, Frank, and Ken. We decided to give add the n’ to in a way give it two ways to read it, give it a bit of word play. It could be “J F and K” or “JFn’K” kind of like the old Gn’Fn’R.” They had posted some releases on Bandcamp with JFK-themed cover art, including an EP entitled Back and to the Left, but they had never written and recorded a song about the JFK assassination. They suggested that they write a JFK song and I could debut it on Turn Me On, Dead Man Radio, which I thought that was a cool idea. At the same time I was corresponding with the psychedelic band Dark Fog. In an email I wondered if Dark Fog would be interested in recording a JFK song and they responded enthusiastically to the idea. It struck me that I could originate a new garage/psych compilation of JFK songs, and I read up on Creative Commons licenses.

I sent I don’t know how many bands an email asking if they would contribute a track that made some sort of reference to the JFK assassination–the reference could be a person, place, thing or conspiracy theory that people associate with JFK’s death. The response I got ran the range from, well, no response, to “Huh?” to enthusiastic. I also posted a classified ad on the GaragePunk Hideout asking for submissions. All the while I kept finding JFK-themed songs on Bandcamp. I asked bands here and there if I could use songs they had already released, and in those situations I was pleasantly surprised that almost everyone said yes. As of this writing I have received 26 tracks for the compilation. Eleven bands contributed new tracks (8 that I contacted directly and 3 through the classified ad I posted on the GaragePunk Hideout), 13 bands agreed to let me use a track they had already released, and two tracks came through word of mouth. All but five of the tracks are either previously unreleased or released since 2010.

I spent quite a bit of time writing the liner notes for Conspiracy A-Go-Go. In my regular job I’m a “non-essential” federal government employee and I was among the 800,000 federal workers furloughed during the government shutdown in October. One of the reasons the liner notes for Conspiracy A-Go-Go are so extensive is that the government shutdown was particularly well timed (for this compilation, anyway). I spent the furlough listening to JFK tracks as they came in and writing liner notes.

Ironically, one of the last tracks to come in was “Back and to the Left” by JFn’K. The title is a reference to JFK’s reaction to the fatal head shot. 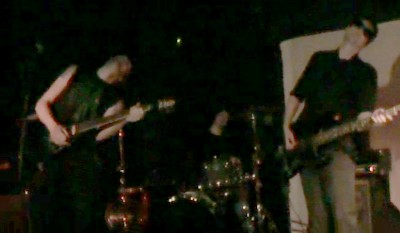 JFn’K “Back and to the Left”

The Warren Commission determined that three shots were fired at JFK from the Texas School Book Depository, and the third shot struck JFK in the head. Even though this shot came from behind, Kennedy’s head did not move forward upon impact. Instead Kennedy’s head went back and to the left. Luis Alvarez carried out experiments with melons to demonstrate that the motion of Kennedy’s head would be consistent with a shot from behind due to the “jet effect”–matter is blown forward out of the head and the head then reacts by moving backward. Stuart Galanor, author of Cover-Up

argues, however, that for the head to go back and to the left due to the jet effect, the jet stream of matter from Kennedy’s head must move in the opposite direction–forward and to the right. Close examination of the Zapruder film does not show this to be the case,though. Also, Jackie Kennedy famously jumped up onto the trunk of the limousine to retrieve pieces of JFK’s skull and brain matter that were blown backward out of Kennedy’s head.

By the way, the title of the compilation, Conspiracy A-Go-Go, is a reference to the 1991 Richard Linklater film Slacker