Turn Me On, Dead Man: I’d like to start off by asking about your influences. I’m particularly curious why you chose to record “Leaving You”. I love 1960s garage/psych “nuggets” so I’m curious to know how you came to record that song.

Cesar Marin: Well that song wasn’t planned to be released, we would just jam it out during practice. We decided to record it how we play it and thought it was rad so we included. We’re big fans of 60’s garage stuff as well, Back From The Grave comps and stuff like that.

TMODM: I was also wondering if recording that song was an homage to Iggy Pop. [Note: at this point I got confused, thinking “Leaving You Baby” was by The Iguanas from Ann Arbor, Michigan, whose drummer was a very young, almost unrecognizable Iggy Pop, then known as Jim Osterberg. Later I looked it up and discovered that The Iguanas who recorded “Leaving You Baby” were a completely different group from Baytown, Texas. The original “Leaving You, Baby” is on the compilation Sixties Archives, Vol. 6: Texas & Michigan Psychedelia

] I’m guessing the Stooges are one of your main influences?

CM: Haha somewhat. We actually have dedicated and have said it’s an Iggy Pop cover at our shows. The Stooges are an influence but I don’t think we have a one MAIN influence. Some other influences are the Ramones, Dead Boys, 13th Floor Elevators, the Sonics, and newer stuff like Jay Reatard, Ty Segall, and the Reatards.

TMODM: So how did the band come together and how long have you been at it?

CM: The band as GHALI has been playing since 2012. We came together after Nick [bass], David [guitar], and myself wanted to try a little more different sound than the band we were in before. I’ve been playing with those guys close to 4 years now.

TMODM: What sort of music had you been playing? How much of a change in direction was it for you?

TMODM: What’s the significance of your band’s name? I googled Ghali and found this definition in the Urban Dictionary: [“A guy named Ghali is always the loudest person in a room. He never goes unnoticed, especially because of his subtle charm and because of his luscious caramel tan. He is always surrounded by beautiful girls, and when other girls see him, they shout out DAYAM! he’s hawt!”]. Is that why you chose the name?

CM: Haha. It’s kind of an infamous spot in our neighborhood where this dude named Ghali would sell us beer before we were 21. We wanted a different name than most bands in our area have.

TMODM: You’re in Orange County? Whereabouts? How often does Ghali play live and how far have you traveled as a band?

CM: Yes, we’re from Santa Ana and Westminster. We try to play as much as we can or given.chance. We play locally and in the L.A. area mostly but planning a mini Northern California tour of this spring break.

TMODM: How did you connect up with Resurrection [a record label based in Portland, Oregon]? Portland is quite a ways away from southern California.

CM: Well my buddy Mike that I’ve known since we were teenagers runs that label and I showed him our stuff. He really dug it and wanted to release our stuff. That tape helped us out a lot.

CM: Rad! Glad you liked it! It took us about a week to.finish, we did all on our own. David used the laptop and Pro Tools and that was it.

TMODM: Will you be releasing a follow-up anytime soon?

CM: Yeah we’re coming out with a 7″ record this May on Goodbye Boozy Records from Italy Also we’re doing a cassette tape EP with a US press on Resurrection Records and Euro press on In The Shit records from Italy out pretty soon probably by March.

TMODM: That sounds great. I’m looking forward to hearing what you put out in 2015. Any other plans for the future?

CM: Just to be put on some more good shows and put out an LP by the end of the year. Also follow us on instagram at ghali714 and give us a like on Facebook for more updates on the band

TMODM: Best of luck to you.

CM: Thank you as well for the support! You will definitely hear about us in the future! 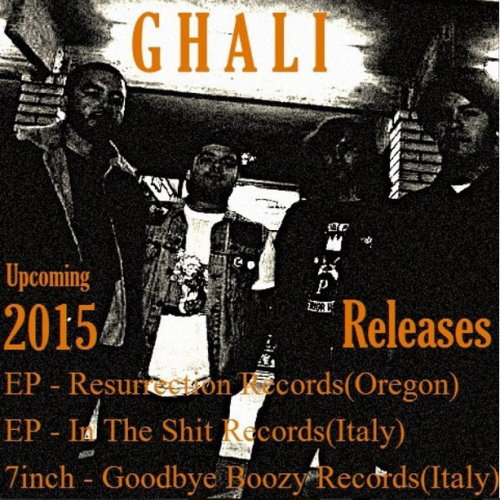 One thought on “Ghali on Dig the Now Sound”