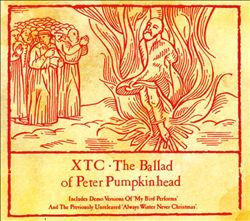 “The Ballad of Peter Pumpkinhead,” which was released as a single and was the lead-off track on XTC’s 1992 LP Nonsuch

, isn’t specifically about the JFK assassination. According to songwriter Andy Partridge, “I just started writing about this perfect sort of Jesusy character who happened to have a pumpkin for a head.” Taking his inspiration from a rotting pumpkin just outside their studio, Andy Partridge was trying to write a song about political martyrdom in the mold of a “Bob Dylan-style epic”. The instrumentation of this track is also inspired by Dylan and features a harmonica. According to guitarist Dave Gregory, “I just came up with some Harrisonesque guitar and we added some Hammond organ to give it that Al Kopper, Blonde on Blonde feel.” Some of the lyrics are suggestive of JFK, such as the line “Plots and sex scandals failed outright”. The song’s reference to the Vatican could also be interpreted as a reference to JFK, as he was the first Catholic president of the United States. Still, each verse of the song remains very general and does not commit itself to a specific historical figure.

The video for this song, however, is another story, as it contains a number of visual references to JFK. The video shows a motorcade in a vintage car with a Kennedyesque figure waving from the back seat and Andy Partridge is shown holding a vintage movie camera, suggesting the Zapruder film. The video also shows a woman who looks much like Marilyn Monroe, with whom JFK allegedly had an affair. Throughout the video a set of guns is shown next to text reading “Both Brothers,” referring perhaps to the assassinations of both John F. Kennedy and his brother, Robert F. Kennedy.  In addition, a number of times a little boy is shown looking on, which serves as a reminder of John-John, who famously saluted as his father’s funeral procession passed. According to XTC: Song Stories

by Neville Farmer, Andy Partridge was “justly dismissive” of the JFK-themed video. He also expressed jealousy that the Crash Test Dummies had a hit with their version of the song, which was included on the Dumb and Dumber

soundtrack. The Crash Test Dummies made no references to the JFK assassination in their version of the song or its video.

The Ballad of Peter Pumpkinhead
by Andy Partridge
performed by XTC

Peter Pumpkinhead was too good
Had him nailed to a chunk of wood
He died grinning on live TV
Hanging there he looked a lot like you
And an awful lot like me!

Don’t it make you want to cry-oh?