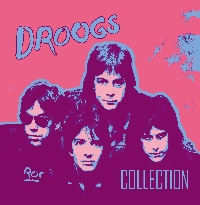 The Live Music Archive is a repository of live shows by a wide variety of bands maintained by etree.org and made available to the public through the Internet Archive. All of the music in this collection is “trade friendly“, meaning that the bands have all approved making their live shows available for non-commercial purposes. After finding some bootlegs of shows by The Droogs, I contacted the Droogs’ guitarist, Roger Clay, about putting these into the Live Music Archive. A few years ago I interviewed Roger about the Droogs and he had related the story of their memorable performance at the 1997 Roskilde Festival in Denmark. The Wu-Tang Clan had been scheduled but they had gotten detained at the Newark airport. The Droogs agreed to fill in but the festival organizers didn’t make that clear to the audience. Despite being pelted with bottles, the Droogs played on and won over the crowd. After hearing Roger’s story I tracked down a bootleg CD of that show. Later on I found some more Droogs bootlegs on the internet of live shows from 1985, 1986 and 1987. I wasn’t sure how the Droogs would react to making bootlegs freely available, but they liked the idea and Droogs vocalist Ric Albin even wrote liner notes for each show, included below. They also sent me a CD of an additional show from 1988 to include in the collection.

So here’s to the Droogs, a great live band. You can find the shows listed below on the Live Music Archive. If you have any additional bootlegs of live Droogs concerts please send them to me so I can add them to the collection.

The I-Beam, San Francisco, CA, August 27, 1984
When the Droogs first played Boston on their ’84 tour, the Lyres were the first to warmly welcome them by opening their premiere. By ’87, the Droogs returned the favor at the I-Beam in the Haight-Ashbury district. If this is the same tape, the mix is a bit bass and vocal heavy, thereby not enough guitar volume which is essential. However, the set opens with a nice jam of Garden of my Mind.

The Nightclub, Boston, MA, March 27, 1985 (Broadcast on WERS-FM)
Droogs bless college radio, the fuel of the alternative fire. This broadcast, one of many performed to promote a gig, a record or create a bootleg, was done at Emerson college; the host of the hour was named Shred.

Zentrum Zoo, Tübingen, (West) Germany, September 29, 1986
A prime example of the liberating force and momentum of the Droogs performance on their maiden European tour. A pivotal encounter with this show’s promoters, the dynamic Music Maniac Records team, headed by avid collector and wunderkind Hans Kesteloo, led to a long and memorable relationship and discography.

Club Lingerie, Hollywood, CA, November 3, 1988
It was a busy year for the Droogs in support of Kingdom Day on PVC. The band began by opening  a dozen dates for Robin Trower in the Southwest through the Midwest, followed by a two week club tour back East and down South. The Droogs also went back to Europe for a round of gigs culminating at Berlin’s Independence Days Festival. The Club Lingerie offered a warm welcome home; soundman Rick Stanley, who had worked with them before, captured a great mix.

Roskilde Festival, Roskilde, Denmark, June 29, 1997
In support of their Atomic Garage CD, the Droogs were a late invite to the granddaddy of all Euro-fests Roskilde ’97, a four day annual event outside Copenhagen, Denmark. Flown in Thursday for their Sunday show opening for Phish and Isaac Hayes, the band were given full access to the multi staged venue with the provision they were on call as a standby act. Returning Saturday afternoon from record shopping, the band was informed that headliners Wu-Tang Clan were a no-show, the 2 am slot in the Green Tent was all theirs. Danish radio quickly negotiated to tape and broadcast that very performance. The next morning national newspaper headlines read: “Droogs bombarded by new rain of bottles.” Reporter Erik Jensen wrote: “Despite dangerous conditions the Droogs played a tight well organized program to the end. When garage rock is done so effectively in a primitive atmosphere, you give in. This audience did as well with calls for encores.” For the Droogs, best gig ever.