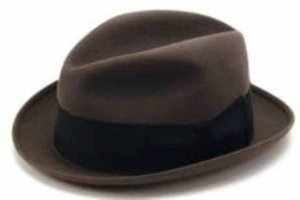 The Crick Gypsies from Cincinnati, Ohio, are a roots band that incorporate a variety of influences. The term “Americana” applies to them, but they use the phrase “Original American Music” to describe themselves. CincyMusic.com describes them as “Bob Dylan and Mike Nesmith busking on the steps of the gilded palace of sin.” In any case, one of their songs, “Jack Ruby’s Hat” offers a clever take on the JFK assassination. When Jack Ruby gunned down Lee Harvey Oswald on November 24, 1963, he was wearing a gray fedora. This image was captured on camera and for a time Jack Ruby was identified as “the man in that hat.” 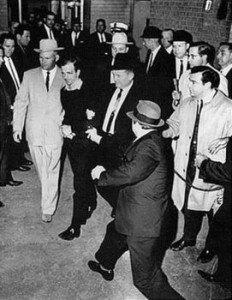 In the Crick Gypsies’ song the narrator buys Jack Ruby’s hat on eBay. His life becomes filled with chaos and he attributes his bad fortune to the hat. I corresponded recently with Patrick Ewing, who wrote this catchy, lighthearted song.

Patrick Ewing: I think I saw that, or a similar post on-line. In the song I say “I got it on eBay.” Got me thinking about Jack Ruby and that Sunday morning. Thinking about how, watching it live on TV as a kid in ’63, I noticed the hat before I saw the gun. Thinking about bad luck in that hat and to all those who wear it. Then it just took off on its own.

Turn Me On, Dead Man: When did you record the song? There’s no date on Bandcamp.

Patrick Ewing: We’ve recorded the song several times but I think the version on bandcamp was done in 2008. The EP on there was done in 2010.

Turn Me On, Dead Man: I’ve listened to this song several times now and I think it’s great. I would like to ask you what it all means but I don’t want to over-analyze it. To be honest, though, that’s the way my mind works. So what does Jack Ruby’s hat symbolize?

Patrick Ewing: As far as what the song “means”, I’d say it has to do with the random events in life that change individuals; or in some cases, alter history. Jack Ruby may or may not have been part of a large conspiracy but as soon as he pulled the trigger on Oswald, that image, including his hat, was eternally etched into the global iconography. It all seemed like an improbable coincidence at the time whether it was or not. The narrator in the song passes through a series of unlikely events and his only explanation for any of it is tied to the belief that the hat causes misfortune. Even so, because of its history and mojo, the hat is desired by hipsters worldwide.

Find lots of trouble every place I go
Some of it’s real but you know, a whole lot of it’s just show
I noticed things really started getting crazy like that
On the day I started wearing Jack Ruby’s hat

Playing for tips down at the Barbecue Shack
Woman walks in with a poodle, it’s got a monkey on its back
She said, “Boy you know there’s not much future in that”
She dropped a $100 bill into Jack Ruby’s hat

Thought she was joking from some things that she said
Then the monkey shot the poodle and they left him for dead
Cops showed up about 10 minutes flat
And they took me to jail, they said I stole Jack Ruby’s hat

The moral of this story, the twist to this tale
As simple as Simon, the boy that paid my bail
He said, “you know, mister, there’s a whole lot of hip cats
They all wish they were wearing Jack Ruby’s hat”