.  “Whole Lotta Love” was initially credited to Jimmy Page, Robert Plant, John Paul Jones and John Bonham.  In 1985, however, Variety reported that Willie Dixon sued Led Zeppelin, claiming that “Whole Lotta Love” was largely plagiarized from “You Need Love,” written by Dixon and recorded by Muddy Waters as a single for Chess Records in 1962.

To be fair, “Whole Lotta Love” is a creative piece of work that demonstrates Led Zeppelin’s originality. The lyrics, however, do not meet this standard. The opening verse of “Whole Lotta Love” (You need coolin’/Baby, I’m not foolin’/I’m gonna send you/Back to schoolin’/Way down inside/Honey, you need it/I’m gonna give you my love) is readily identifiable from Willie Dixon’s lyrics for “You Need Love” (I ain’t foolin’/You need schoolin’/Baby, you know you need coolin’/Woman, way down inside/Woman, you need love) The next verse of “Whole Lotta Love” (You’ve been learnin’/Baby, I’ve been learnin’/All them good times/Baby, baby, I’ve been yearnin’/Way, way down inside/Honey, you need love/I’m gonna give you my love) strays a little from the original, but is still recognizable (You got yearnin’ and I got burnin’/Baby, you look so sweet and cunning/Baby, way down inside/Woman, you need love/You got to have some love/I’m gon’ give you some love). Robert Plant also takes the words from this verse and turns them into a vocal break near the end of the song. In addition, Robert Plant briefly quotes Howlin’ Wolf at the end of “Whole Lotta Love” with the lines “Shake for me, girl/I wanna be your back door man.” Actually, Plant was once again quoting Willie Dixon, as both of the songs “Shake for Me” and “Back Door Man,” though popularized by Howlin’ Wolf, were written by Dixon.

Robert Plant flippantly discussed this in an interview,

Page’s riff was Page’s riff. It was there before anything else. I just thought, ‘Well, what am I going to sing?’ That was it, a nick. Now happily paid for. At the time there was a lot of conversation about what to do. It was decided that it was so far away in time and influence… Well, you only get caught when you’re successful.

Bear in mind that when Led Zeppelin were recording their second album it had been only seven years since the release of Muddy Waters recording of “You Need Love”. When the lawsuit was filed in the 1980s, a lawyer for the Led Zeppelin’s record company, Atlantic Records, offered only the weak defense, “It’s strange that someone would wait all that time [to file a suit].” The case was settled out of court and recent Led Zeppelin releases have given songwriting credit for “Whole Lotta Love” to Willie Dixon along with all four members of Led Zeppelin. Willie Dixon used the money received from this settlement for the Blues Heaven Foundation, which he founded in 1984. The mission of the Blues Heaven Foundation is to “to help artists and musicians obtain what is rightfully theirs, and to educate both adults and children on the history of the Blues and the business of music.” Until his death in 1992, Dixon worked on behalf of other artists to ensure that they received the royalties they were due for their music.

“You Need Loving” is credited to “Lane/Marriot,” demonstrating that Led Zeppelin weren’t the only ones who were reluctant to give proper songwriting credit. In a 1977 interview with Ray Coleman, Robert Plant referred to Steve Marriot, the lead singer for the Small Faces, as “the master of white contemporary blues.” Perhaps competing with Marriot, Robert Plant sounds very much like the Small Faces’ vocalist during the climactic vocal break (“Way down inside, woman, you need lo-o-ove”). The Small Faces’ “You Need Loving” included a similar vocal break, but Robert Plant draws out this line even more than Marriot had. Where Steve Marriot’s vocal break lasted 14 seconds, Robert Plant stretches this section out to 26 seconds 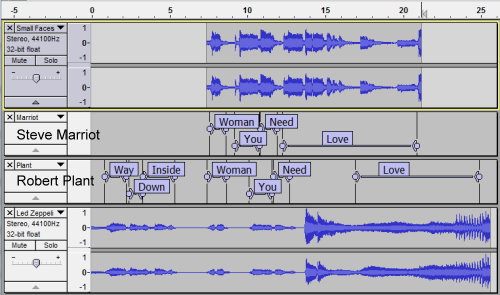 Still, Plant expressed humility in the Coleman interview, “I could never be compared with Steve Marriot because he’s too good, unfortunately! He’s got the best white voice, for sheer bravado and balls.” Steve Marriot, however, was not quite as gracious when he spoke about Jimmy Page and Robert Plant. In Steve Marriott: All Too Beautiful

, Paolo Hewitt quotes Marriot as saying, “Jimmy Page asked me what that number was we did. I said, ‘it’s a Muddy Waters thing’.” He went on to say that Robert Plant was a big fan of the Small Faces. Marriot claimed, “He used to come to the gigs whenever we played in Kidderminster or Stourbridge,” and he felt that Robert Plant copied his interpretation of “You Need Loving” in “Whole Lotta Love.” “He sang it the same, phrased it the same, even the stops at the end were the same.”

It’s interesting that Willie Dixon never sued Ronnie Lane and Steve Marriot over “You Need Love”. Here Led Zeppelin’s popularity (and reputation as music thieves) made them more of a target for legal action than the Small Faces, even though though the Small Faces had drawn more freely from the original (Steve Marriot also lifted lines from “Land of 10,000 Dances” as he listed off several of the dances from that song). Willie Dixon may not have been aware of the Small Faces version. The only reason Willie Dixon was aware of “Whole Lotta Love” was that when his daughter, Shirli, was 13 years old, she heard the record at a friend’s house. She thought it sounded familiar so she borrowed it and played it for her father. After Willie Dixon’s death, Shirli Dixon-Nelson and Dixon’s widow, Marie, ran the Blues Heaven Foundation. It was through their efforts that the Blues Heaven Foundation moved into the restored Chess Records Studio at 2120 South Michigan Avenue in Chicago. 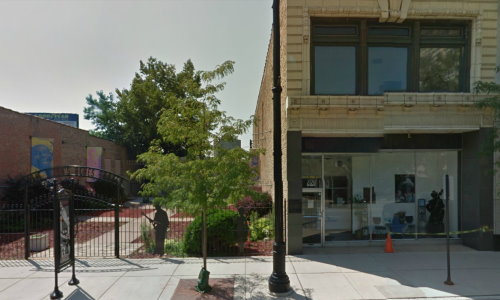 2120 S. Michigan Ave. in Chicago,
the former offices and recording studios of Chess Records and now the site of the Blues Heaven Foundation