“Single Bullet Theory” is an acid punk gem by the incredibly prolific band Exploding Castro Cigars. The title of the song refers to the Warren Commission’s findings about the wounds sustained by President John F. Kennedy and Texas Governor John Connally as their motorcade passed through Dealey Plaza in Dallas on November 22, 1963. The Warren Commission concluded that three bullets were fired at President Kennedy, all from the sixth floor of the Texas School Book Depository. This meant that the second bullet would have had to have struck both Kennedy and Connally, who was sitting in the seat in front of Kennedy. The bullet tore through Kennedy’s neck causing him to raise his arms, then through Connally’s midsection before striking him in the wrist. Critics sometimes call the “single bullet theory” or the “magic bullet theory,” arguing that the bullet must have changed direction in mid-air. Also, the bullet was found in almost pristine condition despite the going through both men and striking bone along the way. According to Joe Marchi, who wrote the song, “I called it ‘Single Bullet Theory’ because it was so implausible to think that was the case.” 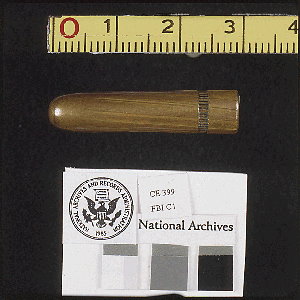 “Single Bullet Theory” by Exploding Castro Cigars is told from JFK’s perspective as the assassination is unfolding and offers a twist on the usual conspiracy theories. In this version of the story, JFK is world weary and submits to the assassination (“I can now pass cuz this place is getting old”) “Single Bullet Theory” shows a malevolent JFK who freely indulges in drugs and maps out the “Kennedy curse” as becomes aware of what is taking place. He foresees Robert F. Kennedy’s assassination, Ted Kennedy’s incident at Chappaquiddick, and thinks of Jackie Kennedy’s life going to waste after they “Take my skull chunks out of her face”.

“Single Bullet Theory” has plenty of references to conspiracy. “Fake piggy on the side fills my coil with one more” refers to images of “Badge Man,” a vague image of a shooter on the grassy knoll who appears to have been wearing a police uniform. In the song JFK disputes the Warren Commission’s conclusion that only three bullets were fired (“I get my head in my hands and I think there were 4 bullets or more”), which would mean there must have been more than one shooter and a larger conspiracy at play. Using Wizard of Oz imagery, “Single Bullet Theory” describes Lee Harvey Oswald as “the wizard of Ozzie”, a patsy who is felled by “the Ruby”. The lyrics allude to Fidel Castro, as well, but when I asked Joe if he thought Castro was involved in the assassination, he said he thought it was an “inside job” and pointed to the CIA.

“Single Bullet Theory” was the opening track on an EP of the same name released by Exploding Castro Cigars in July, 2011. The cover image is a Mad magazine cover from October, 1963, showing Castro smoking a cigar with Alfred E. Newman plugging his ears in anticipation of the explosion. Like much of Exploding Castro Cigars’ material, “Single Bullet Theory” revels in Cold War intrigue and absurdity (one of the genre tags on the Bandcamp page for this EP is “MKUltra,” the CIA’s mind control program that began in the 1950s and continued through the 1960s). I asked Joe what his inspiration for this song was and he told me that he had just finished reading The Cold Six Thousand

Oh I feel (although I can’t) that Cuba’s at risk
Teddy looked at me funny but I feel his car likes the water
And I know inside Bobby is a goner
Good old Joe, I let him know, grabbed a knife and made him grow

Oh, Ozzie
You didn’t do that 999
You just loved playing patsy
Here comes the wizard of Ozzie with the Ruby
Oh no, lay down down down