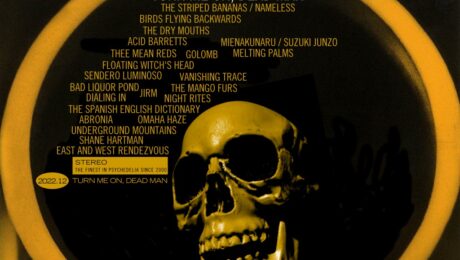 Two hours of psychedelic/stoner/garage rock tracks that have all been released in 2022. The tracks in this episode come from Europe, the US and Canada, and one track from Australia, “Dark Patterns” by Night Rites. One of the most notable tracks featured in this episode is a collaborative effort between an American band, the Striped Bananas, and the Ukrainian band Nameless called “Newest Age Man”. A few weeks ago I did an episode of Turn Me On Dead Man where I focused on garage, stoner and psych bands from Ukraine, and “Newest Age Man” was released just after I posted that episode. Nameless works with the charity foundation Musicians Defend Ukraine which directly helps Ukrainian musicians and artists who joined the Ukrainian Armed Forces in response to the Russian invasion.

Another notable track in this episode is “Invisible Hammerblow” by Mienakunaru–notable because it comes from the compilation We Love You Junzo. In February Suzuki Junzo fell from a train platform in Tokyo and that resulted in some serious injuries. He’s in a rehabilitation hospital now and is unable to tour or record music. We Love You Junzo is a benefit for Suzuki Junzo to support him financially but they also call it a “giant get well card”. Mienakunaru is a collaboration between Junzo and Mike Vest with Dave Sned on drums. I played a track by Mienakunaru on an episode of Turn Me On, Dead Man last year.

The last set in this episode opens with “Montjuic” from East and West Rendezvous, a group of musicians from Edinburgh, Scotland, who played an improvisational set drawing on spiritual jazz and psychedelic rock. Listening to this got me to thinking about an experience I had recently in the parking garage of Walmart in Washington DC. My feelings about Walmart are complicated, I guess you could say. A few years ago they built four stores in DC and they’ve genuinely been positive additions to the neighborhoods they chose. Still, it’s Walmart and I probably wouldn’t go there except that my teenage daughter loves shopping there. I bought her a mirror and I was having trouble getting it into my car. If you ever happen to be in the parking garage of the Walmart on Georgia Ave in Washington, DC, one of the first things you’ll notice is that it’s really hot–I mean the ventilation must be terrible–so I’m always anxious to get out of superheated noxious Walmart fumes. I was really getting frustrated trying to get this mirror into my car and this guy just appeared out of nowhere with a clipboard. I’m not sure what he said but all I said to him was “Whatever it is I’m not interested” before noticing he was wearing a T-shirt that said “Love Thy Neighbor.” I’m usually not rude to people but I was having a difficult time. He was nice about it and went away, and, of course, I felt shitty about it after that. There’s very little chance that he would hear this, but I’m playing the track “Montjuic” by East and West Rendezvous as a sort of message of atonement to the universe for being rude to someone who probably just wanted to tell me the good news.